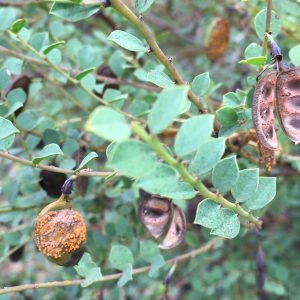 During the La Nina summer 2021-22 in Australia a number of social media posts about a rust that lives on one of our native peas (Bossiaea) often on the pea pods. So we (Zenobia, Sapphire & Fran) wanted to share some information about this native Bossiaea rust (Aecidium eburneum).

Rusts are fungi that live as parasites on living plants. These can become problematic in places where vegetation is simplified like the predominantly monocultures of many agriculture and plantation systems. Due to their economic impact we know a lot about rusts that cause diseases to our commercially grown plants.

Sadly Australia is now living with the exotic disease causing Myrtle Rust. The pandemic strain we have affects soft leaved trees and shrubs in the Myrtaceae family, like lillypillies, bottlebrushes, paperbarks and more. These trees and shrubs are structural species across many of our ecosystems. We need good biosecurity to protect our landscapes.

We know less about our native rusts and you can help us learn more. 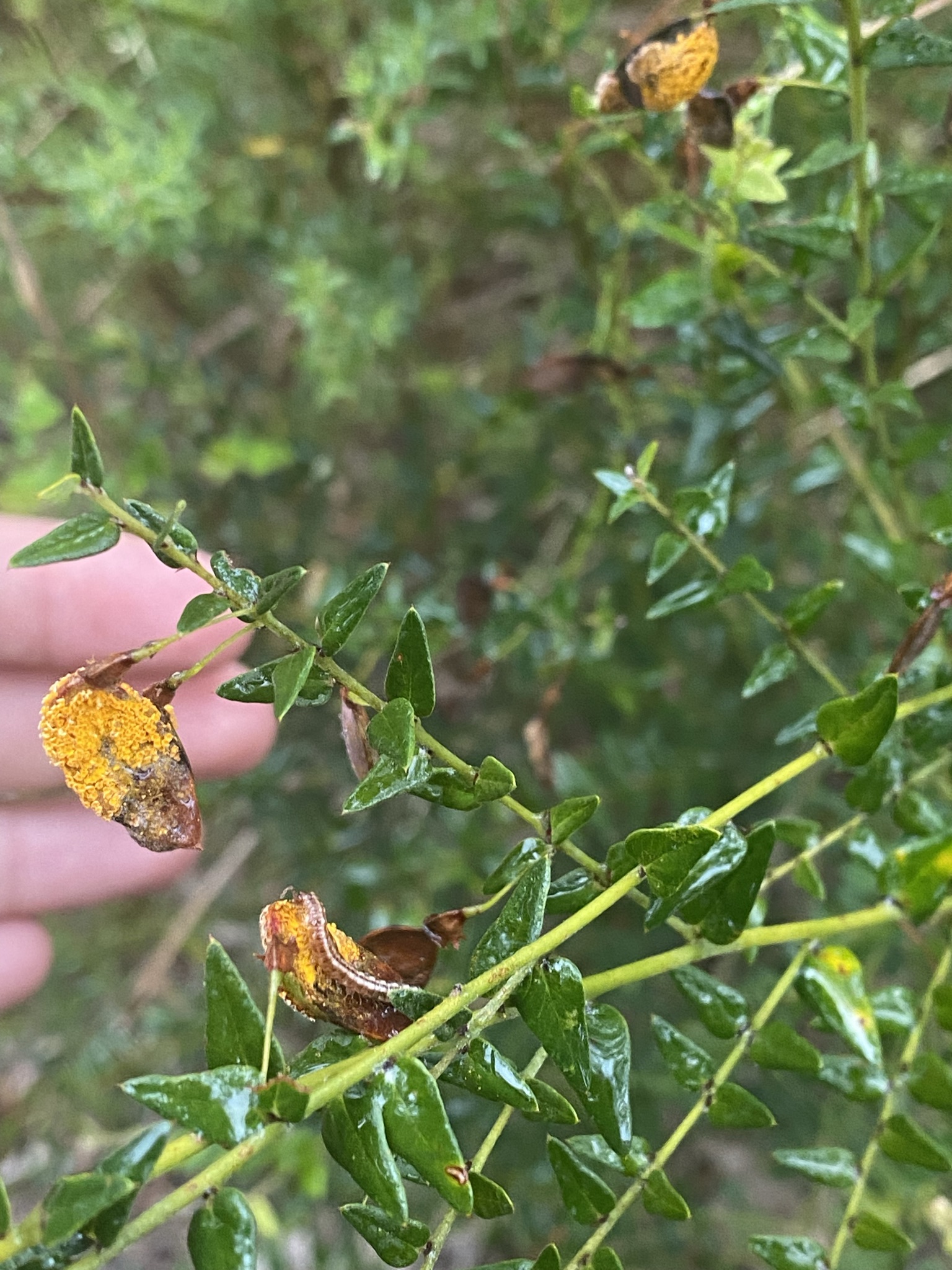 In November of 2021, I was walking down a track in a well known reserve called The Grange, in Clayton South where I came across a very bright orange rust fungus. It was growing on a plant called Showy Bossiaea (Bossiaea cinerea), a plant that is indigenous to the area. I found that it wasn’t just growing on one of the plants, but all of them. I also noticed that the rust was only growing on the seed pods in particular, and it appeared that the pods hadn’t been able to reach full maturity as the rust had consumed them, and some had shriveled up before being able to drop any seed.

In December 2021 it was seen on (Bossiaea rhombifolia) on the border of Queensland at Girraween National Park. Bossiaea rhombifolia is a common shrub in the park at Girraween, and I saw the rust on some seedpods in several places. Its bright orange colour made it stand out against the soft grey-green of the foliage and the dark brown normal seedpods. Each pod was ~1.5cm long, and I saw it once on a stem.

Photos were taken with my iPhone and iPhone plus Struman macro lens for the close-ups.

Bossiaea rust can be seen in summer (Nov-Mar) on Waterbush (Bossiaea aquifolium) in southwest WA in the understory of Jarrah and Karri forests. Katie has seen it on another ‘waterbush’ (Bossiaea webbii) down near Denmark back in December 2003.

Rust fungi are considered parasites or pathogens of plants but most do not cause disease. Diseases tend to occur when there is a large susceptible population and a conducive environment for the spread of the rust. Wet years tend to have higher prevalence of rusts. 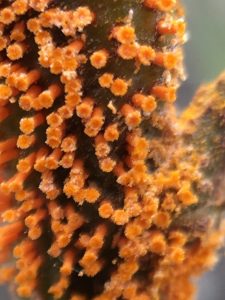 Rust fungi are found in the phylum Basidiomycota, grouped by the way that they produce and spread their spores and their genetic lineage. Rust fungi can have complex life cycles (see resources below). For example, a single rust species can form up to five different spore producing structures, which can be determined by the host plant that they are living on at the time. They can only grow on living plants on which they depend completely, the plant and the fungus have co-evolved this way. This means that they are unable to grow saprobically (growing on dead organic matter), like a lot of other fungi do, making their study more difficult as they cannot be grown in the lab on other media. Rusts can grow and sporulate on the leaves, stems, fruits and roots of a plant, and aren’t always necessarily lethal, but they can cause a large amount of damage to the host plant and effect things like seed production or the plants growth.

Rusts can live on different plant hosts and often have different reproductive stages. We see the asexual spores on Bossiaea. These are called the aeciospore stage  that comprises aecia and the chains of asexual spores they produce. At the moment the alternative host with sexual spores is unknown.

Bossiaea is a genus of about about 78 species in the pea family Fabaceae and is endemic to Australia. These shrubs usually have ‘egg & bacon’ or yellow with orange-brown pea flowers. Leaves are typically alternate but sometimes in a flattened plane. Pea plants (Fabaceae) are important plant communities as they partner with nitrogen fixing bacteria and often mycorrhizal fungi bringing nitrogen into the ecosystem. 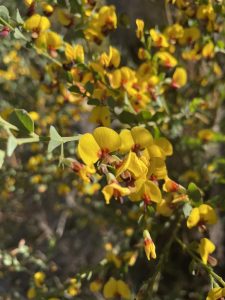 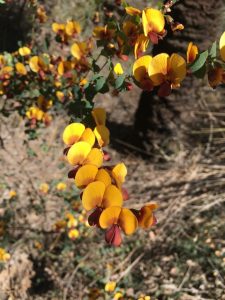 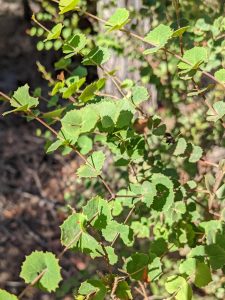 Have you spotted it too?

Although we know this probably occurs across much of Australia we still have very few observations. With out more data we can’t know its full host plant range or if it is more common in wetter years. Please take good photos of the host plant and the rust and post them to iNaturalist. Research grade data from iNaturalist goes into our nation biodiversity amalgamation tool the Atlas of Living Australia.

Humans are responsible for the spread of many pest species of animals, bacteria, fungi, plants, microbes & viruses. The best practice is to arrive clean & leave clean.

Every time you go into our landscape you should have clean clothing and equipment including bags, hats. Cleaning and drying clothes, equipment and tools, like hand washing, prevents the spread of pest species. The easiest way to manage the chance of spreading pest species is to only go to a single place each day and don’t wander around likely infected places like carparks before you head into the bush or farmland. If you must go to multiple sites please use cleaning protocols from best practice above remembering that airborne spores like rusts will be on things like hats, bags, phones and other equipment. So don’t just worry about cleaning soil off – mud and soil is often the focus of problem species like cinnamon rot (Phytophthora).

For more about problem fungi read this on Fungi4Land.

To see current distribution map of Aecidium eburneum on the Atlas of Living Australia.

Online key to Rust Fungi of Australia (unfortunately it doesn’t have a fact sheet for Aecidium eburneum – yet!)

Problem fungi to be aware of at Fungi4Land.

Other native rusts to look out for 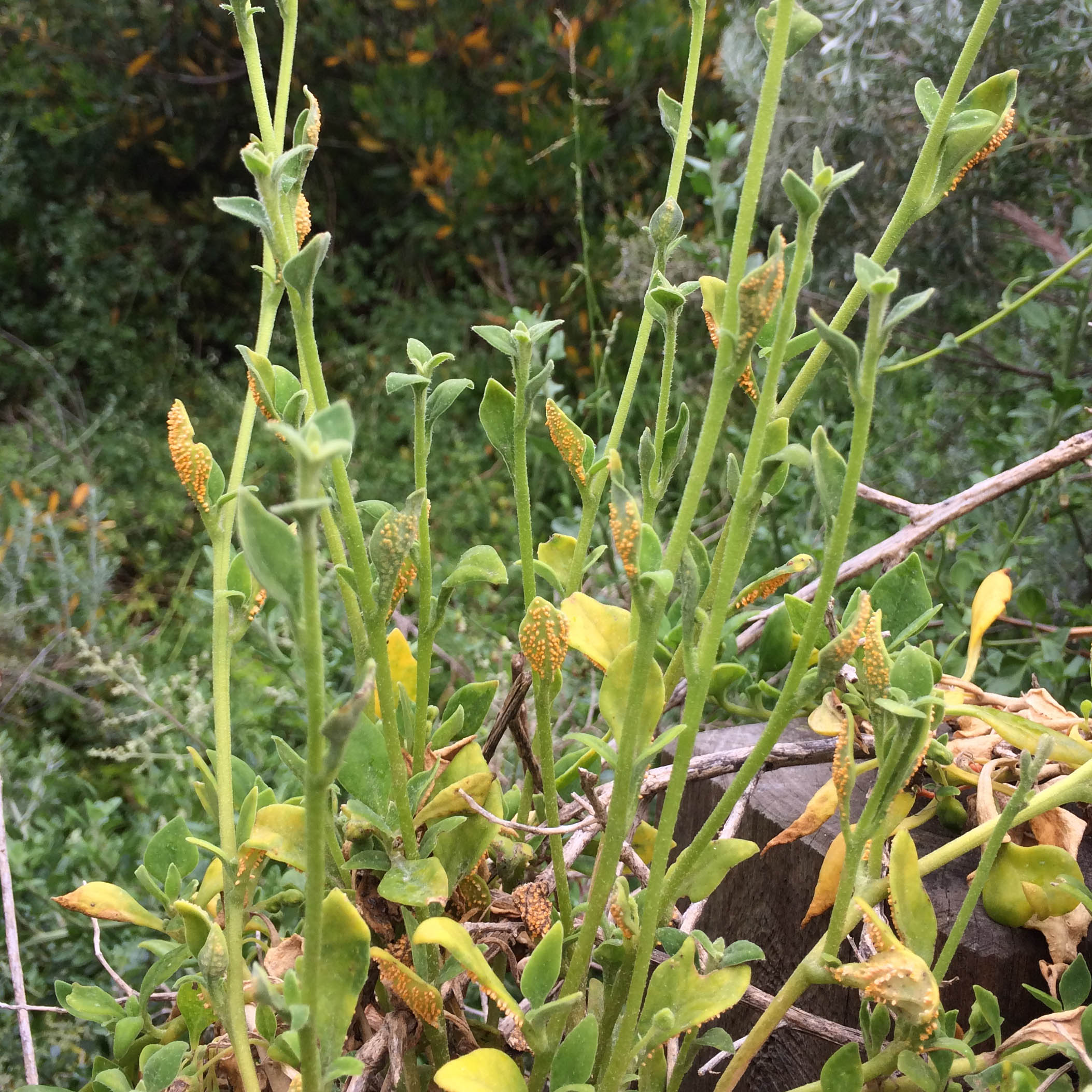 Two other native rusts to look out for and share with iNaturalist are: